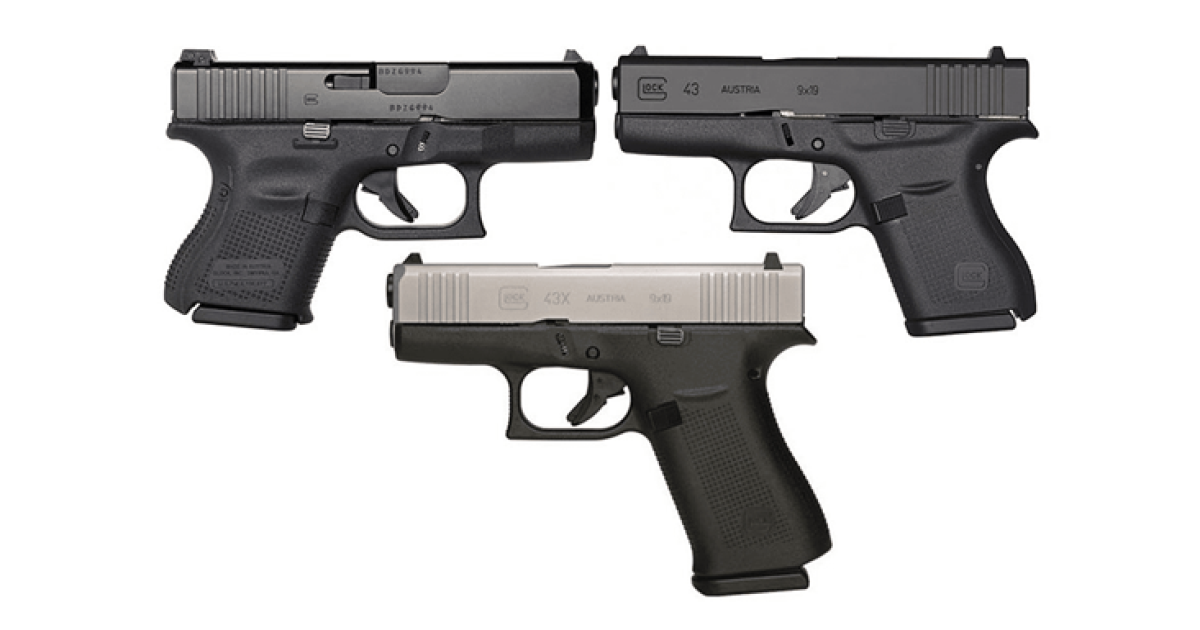 Glock launched two new pistols early in 2019: The compact Glock 43X and the longer slide Glock 48. These Glocks are chambered in 9mm Parabellum, with a 10-round capacity in a stack-and-a-half configured magazine. The Glock 43X and Glock 48 share the same frame, which is only fractionally wider than that of the Glock 43. The Glock 43X shares the compact slide as found on the Glock 43, while the Glock 48 features a longer 7-inch slide in combination with a just over 4-inch long barrel. Effectively, the Glock 48 is a slimmed-down version of the best-selling Glock 19.

Simplicity, combined with legendary reliability, is key to Glock’s resounding success and the Glock 43X and Glock 48 doesn’t stray from that recipe. Both are short-recoil, locked-breech pistols matching polymer frames with steel barrels and slides. The actions are standard Glock Safe Action triggers with integrated trigger blade safeties and feature the same firing pin block and drop safety as found on all Glock pistols.

The table below highlights the difference between the two models and their closest cousins.

The Glock 43X did not impress me initially, as I am not a fan of the X-series of Glock pistols. The X designation sees a longer grip module mated to a short slide. In my mind, the Glock 43X seemed to be a clone of the already existing Glock 26, as it offered the same capacity, in the same calibre, but without the Glock 26’s advantage of being able to accept the higher capacity magazines from the larger double stack pistols. And how much of a difference could the 4mm reduction in thickness really make? Actually, the new Glocks seemed to be a contradiction in terms: Both these pistols had been slimmed down to make them easier to conceal, but then made more difficult to conceal by mating them to a longer grip.

I was not too sure what Glock was trying to achieve with these new pistols, but it seemed like they were a bit confused.

Chatting to Glock 26 and Glock 43 owners, however, it appeared there might after all be a market for a pistol with a longer grip and higher capacity than the Glock 43. A number of Glock 26 owners carry their pistols with a plus 2 shoe extension fitted to the magazine, claiming the pistol is more comfortable to shoot and easier to control in this configuration. The plus 2 shoe extension provides space for the errant dangling pinkie finger which otherwise must be curled in beneath the grip. Getting hold of shorter grips during the draw stroke is also more challenging, making sub-compact Glocks, such as the 42 and 43 and their chubbier 26 and 27 siblings, slightly slower to bring into action.

The shooting fraternity has been asking for a slimline, compact-sized Glock for a long time, and the Glock 48 is the answer.

Looking at the technical specifications, the Glock 48 is almost identical in both length and height to the Glock 19. The main difference is that the Glock 48 is 4mm thinner across the back strap, whiles its slide is also narrower at 22mm, compared to the wider 25mm Glock 19 slide. There is a useful weight reduction of 147 grams (17%), with the Glock 48 weighing 708 grams loaded, compared to a loaded Glock 19 which comes in at 855 grams as per Glock’s official website.

If you are used to using Glock pistols, then these new models are going to be very familiar to you. The grip angle remains the same as for all Glock pistols. The controls are in the same locations, while the trigger is also the normal safe action Glock trigger, just a bit heavier, with the sights being the standard polymer sights – all very familiar!

Taking a closer look at the new Glock pistols, the Glock 48 is the better proportioned of the two guns aesthetically, with its longer slide being a better match to the extended grip. The Glock 48 with its slide which overhangs the front of the frame is very reminiscent of a miniaturised Glock 34. The Glock 43X, on the other hand, appears boxier with the short slide and extended grip creating a very square profile. Both pistols fit the hand well, with the extended grip allowing for a full grip. While you can feel that the grip is slimmer than the chunkier double-stack Glock pistols, it is when you conceal carry these pistols that the reduction in width really comes into its own. The 4mm reduction makes a noticeable difference in terms of both concealability and comfort, with both the Glock 43X and the Glock 48 being easy to carry and conceal. When combined with a quality belt and a decent inside-the-waistband holster, these pistols carry extremely comfortably due to their slim profile and light weight.

Trigger feel is typical of Glock Gen 5 triggers. There is some take up, then some resistance, then the trigger breaks. The reset is positive and is both tactile and auditable. These triggers are fairly heavy, but well suited to a defensive pistol and understandable in the litigious world we live in.

Glock has added front cocking serrations to both the G43X and the G48 and have bevelled the front of the slide and frame for easier holstering.

Technically the Glock 48, as the larger and slightly heftier brother, should have an advantage over the smaller Glock 43X on the range. After all, the extra weight and length are found at the front of the Glock 48 in the form of extra slide and barrel length. This puts that extra 57 grams of weight just where you want it to assist with recoil, while the longer sight radius should lead to better accuracy.

I, therefore, expected the Glock 48 to be both easier to shoot and more accurate than the Glock 43X. What I wanted to determine was just how much better the 48 would be?

My testing was conducted at relatively close distances typical of the self-defensive scenarios which are in line with the primary purpose of these pistols. I was keen to see if the theory stacked up to reality on the shooting range. I was hoping that the difference would not be too great as I was really being drawn to the concept of the Glock 43X!

Finally – to the range

The range session started off gently - getting to know the 2 pistols and learning the triggers. Both triggers proved to be standard Glock triggers. I had cut my teeth on Glock triggers many years ago and know them very well. While many bemoan the triggers on Glocks, I consider them perfectly adequate for self-defensive handguns. And, of course, Glock triggers can easily be improved by simply dropping in a lighter 2-kilogram connector and polishing up all the bearing surfaces.

This slow start gave me a chance to determine the accuracy potential of each pistol. Deliberate groups fired off-hand saw 1-inch groups being consistently achieved with either pistol at 7 meters - Both pistols proved to be very accurate. 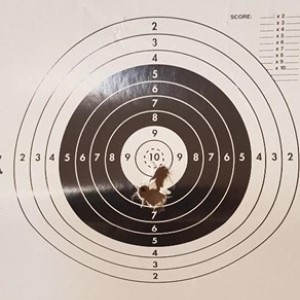 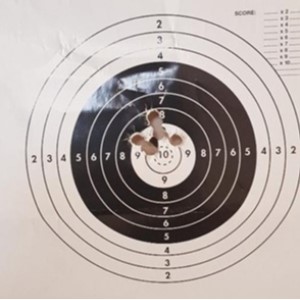 Both pistols had a fair bit of muzzle flip with the 124-grain ammunition used during the range session. This is to be expected with guns this light. There is simply no escaping that light relatively compact pistols are going to kick.

It irks me when I read reviews which state that any subcompact lightweight pistol shoots like a big gun - this is simply untrue and does a disservice to the readers. The best description I have heard is that the recoil from these Slimline Glocks is akin to shooting a Glock 19 loaded with 9mm +P+ power ammunition.

The longer grip on the Glock 43X and Glock 48 makes them easier to draw and assists with recoil management, as the longer grip provides additional leverage which allows these pistols to be snapped back on target quicker for follow up shots. Both these pistols are easier to shoot than the shorter gripped Glock 43, but are more difficult to shoot than the heaver Glock 19 with its wider back strap. 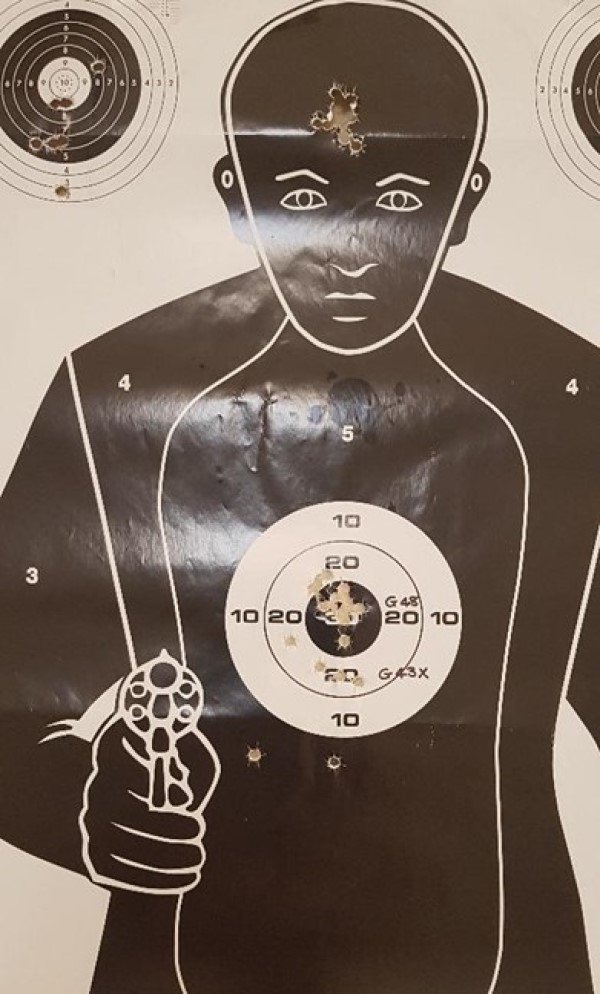 Between the two, I was surprised that I did not find the Glock 48 to recoil any less than the Glock 43X despite its weight advantage. From a practical perspective, there was no real difference. At least not for me.

Both pistols were quick from the holster - a critical aspect for a defensive pistol - as a result of the positive grip offered by the longer grip.

I know it goes against the science, but from an accuracy perspective, I was actually able to shoot the Glock 43X slightly better than the Glock 48. I was really impressed with the overall performance of the Glock 43X as I had been drawn to the concept of a compact, slim, lightweight carry pistol which I feel the Glock 43X epitomises.

Both pistols performed flawlessly, delivering the typical reliability we have come to not only expect but to demand from Glock pistols. No failures of any type were experienced while evaluating these 2 pistols.

A friend of mine, who is an experienced and very capable shooter got to evaluate the Glock 43X and the Glock 48 for a local shooting rag.

He felt that the longer slide of the Glock 48 would be no more difficult to conceal than the Glock 43X as it is the grip that makes concealment a challenge rather than slide length.

It appears we were not the only one interested in determining which was the best slimline carry Glock pistol at self-defensive distances. James Reeves from TFBtv conducted a similar test evaluating the Glock 43 against the Glock 43X and Glock 48 in a shoot-off.

James, like me, was interested in how these pistols performed at typical self-defensive distances. He had a group of three shooters shoot 6 rounds from each pistol in 5 seconds or less. Groups were shot at 3 meters, 6,5 meters and 9 meters. The results were tallied and analysed, and ultimately all 3 pistols performed very similarly. I think that James’ results may have differed if he had the shooters draw each firearm to start each exercise, where the 43X and 48 would have had the upper hand over their smaller counterpart.

If you want to watch the video of this shoot off and listen to James’s analysis of the data follow the link below.

Which Subcompact Glock is Best? - TFBtv

After handling and shooting both these pistols I can say that they are definitely not some sort of Glock 26 knockoff, but rather distinctive slimline compact defensive carry pistols in their own right. There is definitely a market for these new slimline compact carry pistols: They will appeal to people looking for a slim, lightweight, easy to carry and conceal defensive handgun, in an effective defensive calibre with reasonable capacity.

The longer grip allows for a more positive grip when drawing, especially under stress. This is a critical aspect that should not be overlooked as it all amounts to nothing if you cannot get your gun in hand when desperately needed. Additionally, these pistols are easier to shoot and more controllable especially when fired rapidly or when shooting powerful defensive ammunition. The longer grip allows for increased leverage which translates into better recoil management.

As an added bonus the longer grip allows for a higher capacity as well.