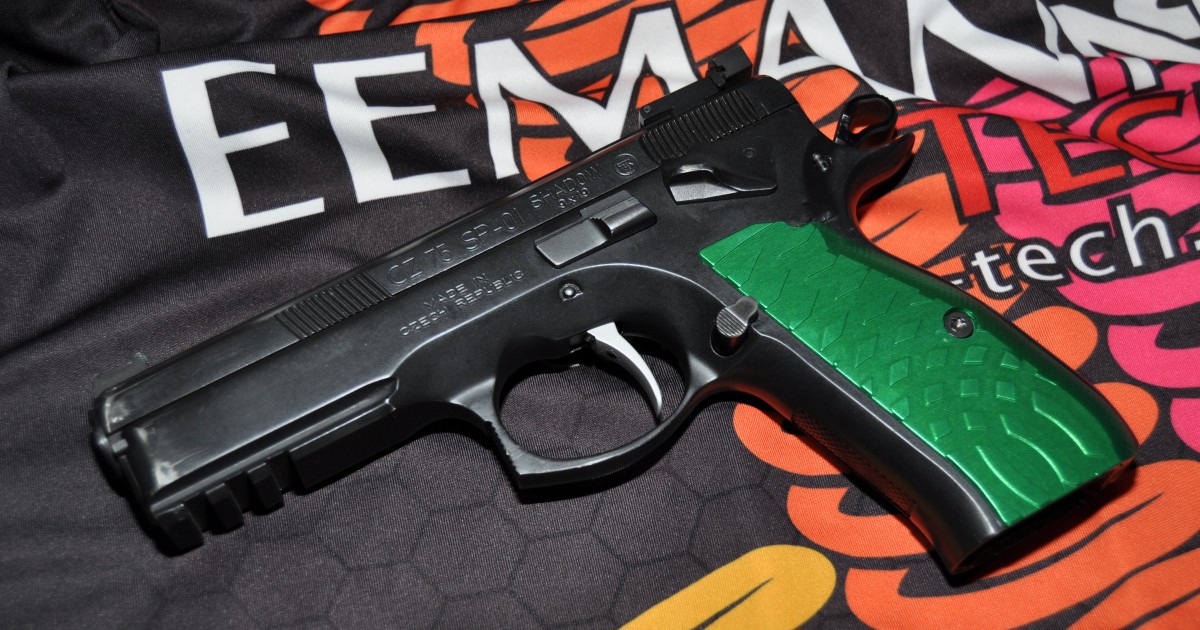 I have long maintained that there is more to trigger design than making it flat, and Eemann seems to agree. Granted, the Ultimate trigger does have a trick up its sleeve that the Flat trigger doesn't, but more about that later.

The image below shows a standard Shadow 2 trigger pinned on top of an Eemann Ultimate trigger and an Eemann Flat SA/DA trigger. 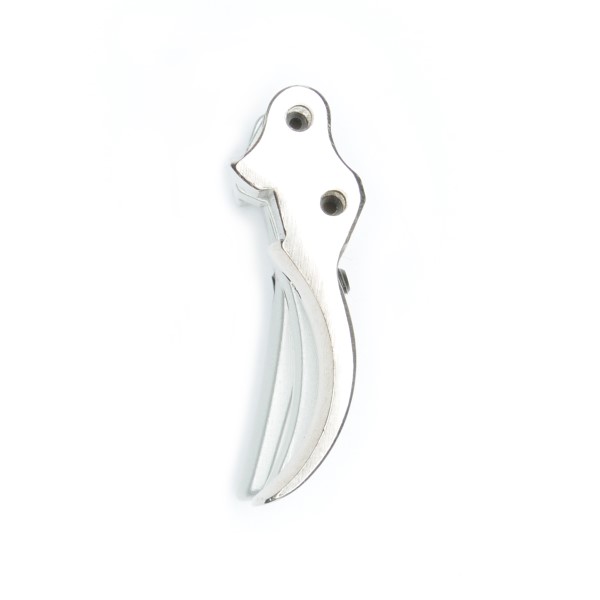 The Eemann Ultimate trigger (center) has a constant curve that almost splits the difference between a stock trigger (top) and a flat one (bottom).

But there is more to it. Allowing for the full range of movement of a SA/DA trigger requires skilful compromise. 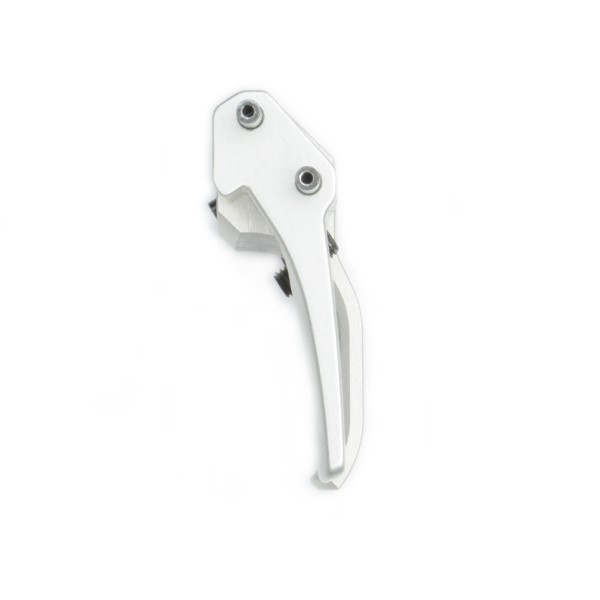 So how does the curved trigger manage to avoid having to compromise?

Some part of the trigger is always a bit further to the back than the straight trigger. And some part is always more vertical however it rotates. Smart - but that "some part" is usually located a bit higher than on a curved trigger than on a straight trigger. And the more pronounced the curve, the higher the sweet spot. And that brings us to why the Ultimate and the Flat triggers work: Leverage.

Eemann's punchline is that both triggers allow the shooter to place his finger further down on the trigger. Increasing the leverage makes the trigger lighter. But it also increases the travel distance proportionally. So, it is a trade-off, but one that many shooters will be willing to make - especially people looking for as light a trigger as possible.

Increasing the travel also implies losing a little bit of crispness in the break. On my pistol, I can't say that I noticed it, but then again, it is my pistol. It was not exactly marginal in terms of crispness to start with.

But enough of the theory. How does it feel?

The image below shows the single-action position in my medium-sized hand. My finger does come to rest lower than on a standard trigger - noticeably so.

The trigger is nice and vertical, allowing me to press it straight to the back. As the picture shows, the tip extends forward of the vertical, but it didn't feel like that under my finger. Being used to a more pronounced curve, it felt very straight under my finger, and I initially got the feeling that my finger could slip downwards. It didn't, and I got used to it surprisingly quick, though.

One thing that struck me about Eemann's Flat SA/DA trigger was that the space between the trigger and trigger guard, in the double-action position, was slightly limited. That would require some practice on my side, to avoid instances of ending with the trigger too far towards the tip of my finger. The Ultimate trigger, with its slight curve, leaves more than enough space, though, and requires nothing different than the standard trigger.

As the photo below shows, my finger is also positioned quite low on the trigger in the double-action position. 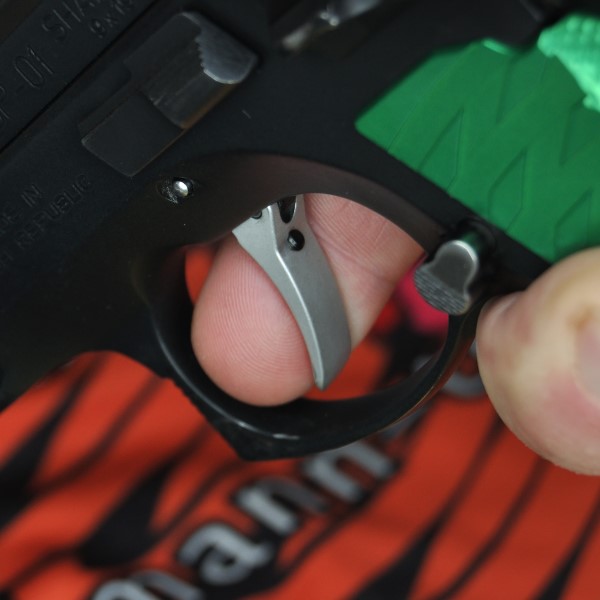 This photo illustrates another important point about the double-action role of the trigger: At no point on the curve does the trigger present a vertical surface.

You can't pull it straight rearwards.

A small downwards force is required.

That is important to take note of. I could actually see the front sight dip once or twice while dryfiring because of this. (I know what you're thinking, but a dip this early in the trigger pull is not anticipation.)

This curved trigger felt nice and flat, combining the best of both worlds. The feeling of flatness was especially aided by the left-to-right profile of the trigger face, which is also just very slightly curved.

When firing a couple of shots with another pistol afterwards, I kept jamming my finger against the bottom lip of that trigger - a sure indication that I was learning to place my finger lower on the trigger than always. That's what they said the trigger would be doing. It does what it says on the box.

The Eemann Ultimate trigger has one more trick up its sleeve, that the Flat SA/DA trigger doesn't: Pre-travel as well as overtravel adjustment. The pre-travel adjustment allows one to remove any pre-travel in the double-action position. This is not a traditional area to look for improvement, but it does allow one to compensate for the little bit of extra length caused by the slower curve on the Ultimate trigger.

But wait. A trigger with pre-travel adjustment is also a perfect starting point for a reach reduction kit. I actually played around a bit with this trigger and a reach reduction disconnector from a competitor, and the results were beautiful. Hint-hint.

So who would favour the Ultimate trigger?

Some people simply find the curve on the standard Shadow triggers uncomfortable, even resorting to fitting triggers from older CZ models. They would love the Ultimate Trigger. As would people who like their triggers as light as possible.

Personally, and for sport, I will always favour a single-action only trigger as long as my chosen Division allows it. I went through five variants before settling on the shape that I'm currently using and I'm pretty happy with it. Should I want to change to a division requiring double-action, I will take a long, hard look at the Ultimate trigger. Specifically, I would run the Ultimate for a couple of months and then switch back to a standard trigger to see what happens. In my experience, the "software" (i.e. you) normally needs a little bit of adjustment before making the most out of new "hardware" and changing back after that shows up any improvement (or lack thereof) the clearest.

The test unit found its final home in my carry gun - a CZ 75 Compact - and in this role I absolutely love it. Small differences in the way this gun is set up and used, compared to my sporting guns, makes the benefits more beneficial and the compromises less of a compromise.

My final conclusion would therefore be: "Give it a try." It is not "better" than anything else out there. It is "different". But "different" could be significantly "better" in your hands.