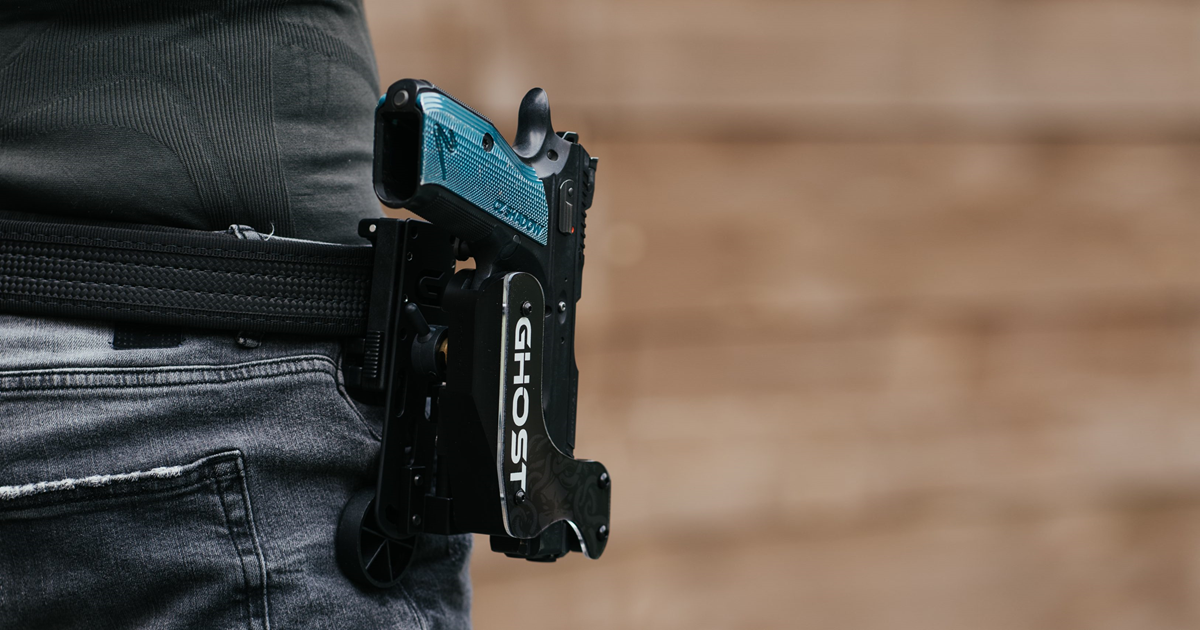 No fancy mechanisms. Just the positioning of the fulcrum on the slide. This is why I am so intrigued by racing holsters. They are such clever little things.

It occurred to me, while I was playing around like this, that I spend more time on how it does stuff, than on the stuff itself. For some reason, this reminded me of alcohol companies spending more time telling us who, where and how they make their products than how it actually tastes. Probably because "it is lekker" doesn't make for a very interesting story.

So I kept on dissecting the new Ghost Hydro holster; To find out how they got it that "lekker".

Ghost's latest offering is extra intriguing because, even before the new Hydra was released, the company was already pitching two different designs at exactly the same price level: The One Evo and The Ultimate Evo. The key difference between The One and The Ultimate is in the way the pistol is holstered.

The Ultimate doesn't have a muzzle support. It grips the pistol purely by rotating a retention block into position behind the trigger guard when the pistol is holstered, thus allowing the pistol to be holstered straight downwards, and released only upwards.

Both holsters share similar locking mechanism designs, which retain the pistol firmly when locked, or releases the pistol with a satisfying "click" when unlocked. In The Ultimate, this design has the trigger guard slip past a polished, spring-tensioned steel bearing. A locking lever can be rotated into position to prevent the bearing from moving and locking the pistol in place.

Well, that's it about the other holsters. The take-away is that the Hydra is designed around the exceptionally smooth locking mechanism from The Ultimate.

You can stay as you are for the rest of your life, or you can change...

The main reason for the Hydra's existence hit home when I walked out of our storeroom with two handfuls of holsters to compare it with. All our "space-age" race holsters as well as some more traditional Kydex holsters. Many shooters, even outside of the USA, where USPSA rules dictate these for Production Division, still feel more comfortable with (Kydex) shells. Even more so with the new breed of holsters, which marries a traditional shell with the fully adjustable hangers normally associated with race holsters.

Ghost already offers a very competitive Kydex race holster, but they looked at The Ultimate's locking mechanism and thought: "We can do a lot with this."

Think of the Hydra as a shell with a race holster locking mechanism. This is what Ghost pitches it as: "The all-new Hydra provides shooters with an option that combines the form and function of a shell holster with the unrestricted draw of a speed holster, creating the best of both worlds."

So? As a race holster, it is unlike anything else that I have felt. It is like picking the gun off a table, with a light "click" as it is released. The additional support at the front of the frame meant that Ghost could ease up on the tolerances around the trigger guard area, so there is no drag whatsoever. Play is taken up by two plastic set screws on top of the slide, so it does not rattle around either.

In fact, it might be too light. Everybody commented on that the first time time they saw it.

Look, it won't fall out, for reasons already explained. But a little bit of resistance can aid in getting a proper grip before the pistol is released. So, the next logical question everybody asked was: "Can it be adjusted?"

Strictly speaking, the plastic set screws, running against the top of the slide, only serves to remove unwanted play. I found that tightening them slightly can allow you to fine-tune the release, but I won't push it too far. More on that later.

I will not try to run with the pistol unlocked in the holster. I tried. It fell out. Twice.

The reason for this question is because the hybrid design holds the opportunity of the ultimate 3-gun holster. The race holster mechanism allows for super smooth drawing, while the shell design allows the pistol to be holstered easy and fast if you need to do so against time. That, and the fact that Ghost is marketing it a such.

Like I mentioned, I did spend some time looking for ways to tighten up the retention. After all, I'll modify a brand new pistol, why won't I do it on a holster? I came to the conclusion that it may depend on the pistol. The front sight cross channel and the sloping slides of a Shadow's slide don't offer the best running surfaces for the set screws, which is why I would advise against tightening them too much, but on the flat slide of a Glock, they might be magic.

But that was always a bit hopeful. As a pure race holster, the Hydra sparkles.

Ghost's racing hangers allow the pistol to be adjusted up-and-down, rotated forwards-and-rearwards, and the grip inwards-and-outwards. If you want to tilt the pistol away from your body, you'll have to bend the aluminium hanger. Not the most elegant of solutions, but if you ever had a ball-joint come loose at a match, you'll appreciate the robustness.

I never "scoop" the pistol - come from underneath the pistol on the draw - but I still prefer holsters that takes up as little space as possible underneath the trigger guard. It makes it easier to get a high grip while in the holster. Unlike Ghost's Kydex bodies, which leave the underside of the trigger guard exposed, the Hydra takes up about 3mm. This is about par for the course, though, with the added benefit of being smooth and nicely ramped.

So, who would use a Hydra?

I like the smooth draw of a race holster, but I'm always concerned that I bump it and it falls. I've seen it happens. And the Hydra's shell gives me just a little more confidence than other race holsters.

Plus, they've still managed to make it look cool. Which is what it's all about, isn't it?